The COIRS simulcast has returned to full service as of 22:35 on 03/31. Circuit connection restored.

The COIRS simulcast is currently in site trunking (03/31 @ 22:00) Dispatchers should have walkies tuned to the talk groups in addition to the consoles to ensure all radio traffic is heard. The cause is a down XO circuit. XO repair has been notified. 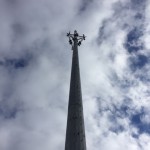 Motorola engineers, along with staff from COIRS, completed the final checklist and officially brought the site up on the air this morning. This site is now bringing expanded area coverage and improved in building coverage in Hilliard, Norwich Twp and Brown Twp. The two channel expansion was also completed on all sites but will not be turned on until COIRS receives FCC approval.